Wild Bergamot (Mondarda fistulosa) also known as bee balm
This is an herbaceous perennial that flowers from June to September. The plant usually grows to about 3 ft. tall with leaves that are 2-3 in. long. The flowers grow in clusters that are solitary at the ends of its branches. It generally grows in dry fields, thickets, and clearings. It gives off a minty or oregano like smell.

Wild Bergamot is medicinal plant that was commonly used to treat colds by making it into tea. It can also be made into a poultice to fight infections. This plant is the natural source of thymol which is the primary active ingredient in mouthwash. 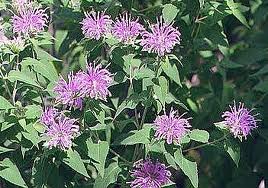 This perennial herbaceous plant is known for its bright blue flowers, which may rarely white or pink. While not originally native to North America, it is considered naturalized because it is no harm to the new environments it is found in. It grows to between 10 and 40 in. tall.
Chicory is one of the oldest recorded plants in history. It may be used for salads, as a coffee substitute, as flavoring for stout beers or forage crop for livestock. As a medicine, it is good for eliminating intestinal worms when prepared correctly. 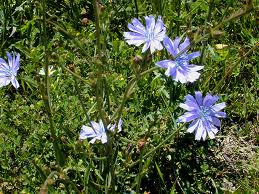